A primary goal for my first visit to Peru’s Cordillera Blanca was to attempt some slightly more technical climbing at high altitude.  While doing research in preparation for my trip Tocllaraju’s steep normal route, aesthetic shape, and perfect location for acclimatization quickly caught my attention.  Soon I was hooked on the idea of an attempt, and found myself dreaming about the mountain’s stark, pyramidal shape while planning and training.

Tocllaraju as seen from Ishinca.

Tocllaraju as seen from the moraine high camp.

While I didn’t end up having a perfect trip in Peru – due to persistent, practically debilitating difficulty eating adequately at altitude throughout the trip – Tocllaraju stood out as an absolutely incredible climb for me.

Our ascent of Tocllaraju was a multi-day affair, as the Ishinca Valley which is used to access Tocllaraju was the first of our several climbing destinations and an ideal place for acclimatization.  The Ishinca Valley is home to a mountain refuge, making it an easy place to spend several days acclimating at a moderate altitude, and is in close proximity to a pair of easy 5000m peaks.  We climbed one of these, 5530m Ishinca, as acclimatization and warm up before beginning on Tocllaraju itself.  The Ishinca refuge, which sits at ~4350m, is accessed via a pleasant ~4 hour hike for which we hired a pair of donkeys to haul our gear and food.  We booked the donkeys and their handler for a reasonable amount through our hotel.

As soon as one reaches the valley proper Tocllaraju’s summit pyramid comes into view.  Prominent and massive, the mountain’s glaciers shone in the sunlight.  The mountain was a constant presence and accompanied us throughout our time in the Ishinca valley, building a sense of anticipation and excitement. 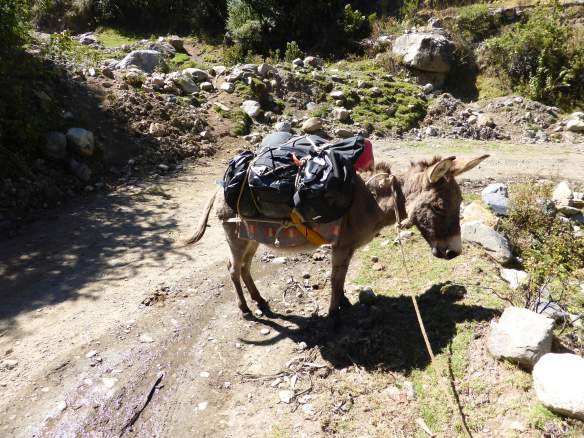 One of our two donkeys loaded up. 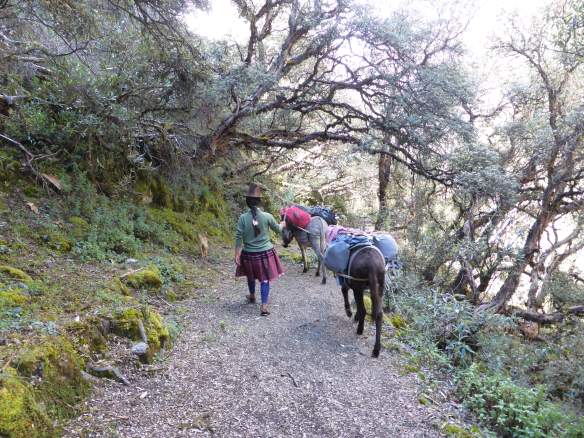 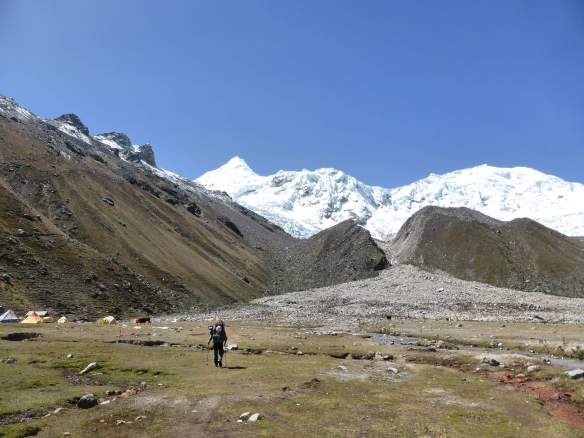 As we entered the Ishinca Valley, our main goal was finally visible ahead of us.

Tocllaraju from the Ishinca Valley.

Our climb of Ishinca went well and introduced me to the awe-inspiring, brutal reality of Peru’s mountains; distances are enormous and views deceptive.  Most of Peru’s climbs involve significant approaches across unpleasant moraine fields and even Peru’s easy, non-technical climbs – of which there aren’t many – are relatively quite physical undertakings.  Despite our success on Ishinca my condition going into Tocllaraju was not ideal.  I had barely eaten anything since arriving in the refuge and felt poorly acclimatized.  Regardless, the day after our Ishinca climb we decided to stick to our itinerary and begin.

Day 1: After a morning spent practicing snow skills we organized our gear and began the long approach hike up to the 5000m moraine camp at the base of Tocllaraju’s glacier.  With heavy, fully loaded packs the going was slow.  The hike was nice enough lower down but became a miserable slog across the lower moraine where soft snow accumulated in shade made the route slippery and treacherous.  We took our time, and after 4 hours from the refuge arrived in the moraine camp.  We arrived at 3:20 p.m., put up the tent, and spent the remaining afternoon resting and taking photographs.

Looking down the valley during the ascent to moraine camp.

Our high camp below the glacier.

The July sun sets early and fast in Peru, taking only some ~30 minutes for darkness to blanket the mountains.  The views at sunset from the high camp were delightful, especially as the setting sun cast a purple glow across nearby Ishinca and Ranrapalca. 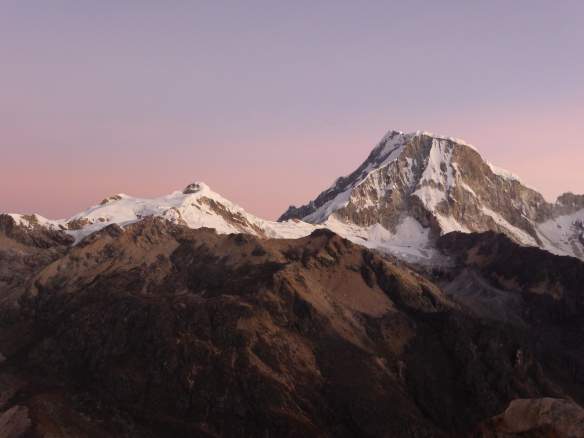 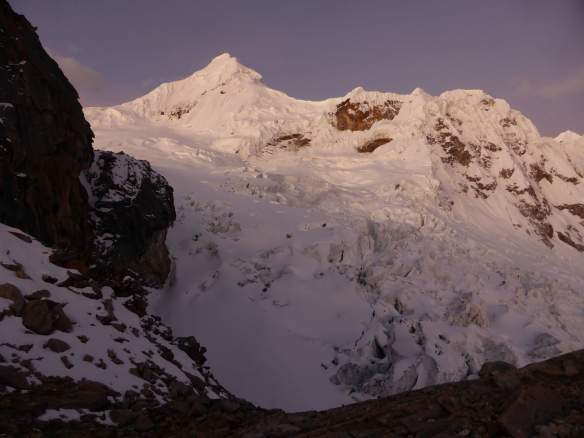 After cooking – and almost immediately giving up on eating – a freeze dried meal, I managed to get down a meagre dinner of sausage, bread, and cheese before turning in so as to be ready for an early alpine start.  I was unable to eat any of my freeze dried food for the first two weeks in Peru, and even literally choking it down seemed impossible.  In hindsight I should have eaten slower and tried harder before giving up on it each time, as I had been able to survive exclusively on the stuff for almost two weeks while on Aconcagua, sometimes allowing myself as much as 90 minutes to carefully finish a meal.  Getting enough calories is imperative while at altitude.  With inadequate nutrition acclimatization is slowed, stamina is compromised, recovery after exertion is slow or non-existent, and mental resolve flags quickly.  No amount of training prior to a climb will compensate for poor eating habits.

Day 2: Out of our sleeping bags at 12:45 a.m., we were ready and moving upwards at 1:30.  After a short section of moraine scrambling we reached the glacier, put on our crampons, and started upwards.  Tocllaraju’s lower glacier is moderately sloped, with only short sections of 45-50 degrees.  We carefully wove our way through the icefall, moving around large crevasses and past hanging ice walls.  The sun began to rise as we reached the base of the first steep pitch.

Sunrise on the glacier.

Here we stopped – there were boot tracks headed upwards, but several different paths led in different directions.  We placed an anchor, and scouting upwards on my belay Edgar discovered an absolutely gargantuan crevasse splitting the slope directly above us.  Several meters wide and seemingly bottomless, we had heard about this crevasse from other climbers in the refuge.  The crevasse had been crossable by a snow-bridge earlier in the season, but it had collapsed beneath a four-person Estonian climbing team a few days earlier.  The collapse had been a tragedy and resulted in the deaths of three of the highly experienced Estonian climbers, the fourth successfully rescued.

This grim knowledge gave us pause, and indeed the crevasse appeared to be impassable.  We knew that there must be some way around the obstacle, as two descending German teams had reported that several of their climbers successfully summited.  Unfortunately all of the boot tracks ended at the crack, and may have been so old as to have been left by climbers who had been here several days before us.  We spent an hour scouting the route on belay before finding a reasonable circumnavigation.  The way past took us up a 2 meter overhanging ice wall with nothing but air beneath it – easily the most intense three or four moves I have ever made with ice tools.

Ascending in the early morning light.

Looking down the route, the moraine far below.  The monster crevasse splits the slope left to right in the lower quarter of the picture.

Above the crevasse the summit came into view, and a clean ~65-70 degree snow slope led to the top.  We powered up two more pitches and overcame a final 1m step of ice which required a few tricky moves to break onto the summit plateau.  The summit itself lay some 20m away, and we traversed carefully, mindful of the serac edge.  We arrived at the top at 8:15 a.m., 6:45 after leaving our tent. 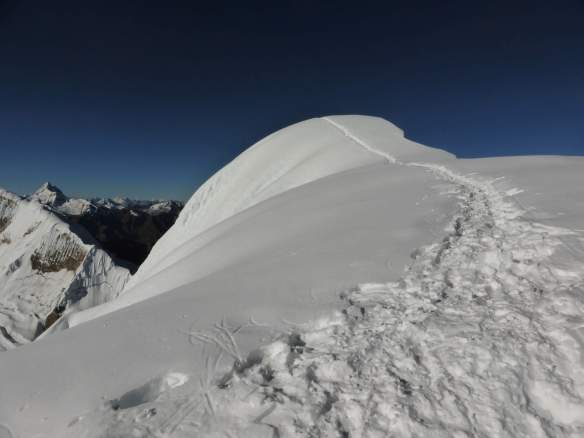 The summit was a large, flat space with clear views of the many peaks and valleys surrounding us.  I felt fantastic on the top, and very happy to have reached the summit strong. 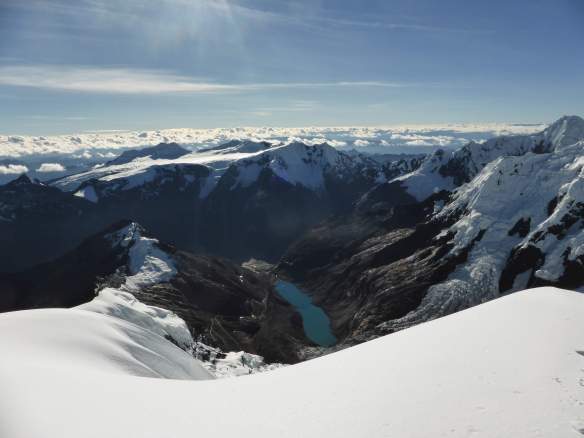 The Ishinca Valley far below. 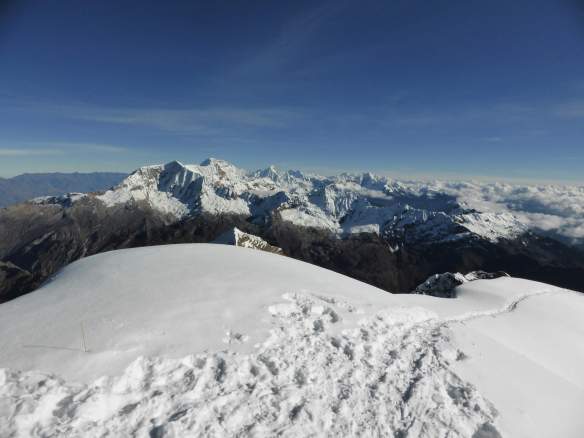 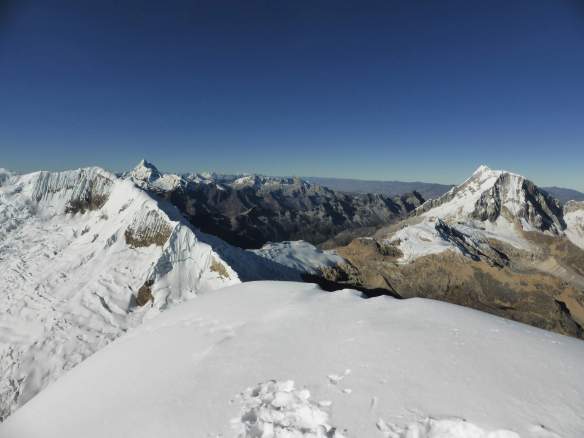 On the summit of Tocllaraju.

After spending some 15 minutes on the top, we decided to begin descending.  An easy to find anchor on the summit provided us with our first rappel station.  The second and third anchors were much harder to find and ever so slightly dubious, looking as if they had been in place for at last a few weeks.  We took a very direct rappel route to the top of the crevasse, where we rappelled around and down our route of ascent.

First rappel, the notch in the serac above is the ice step breaking onto the summit.

Feeling good at our rappel station.

Below the crevasse we roped back up and continued descending our route of ascent.  The complexities of the icefall were interesting in the morning light.  Behind us the summit pyramid looked imposing, and it was hard to believe that we had stood on top of it an hour earlier.  Peru’s mountains are deceptive in their scale and descending in daylight gave us a tangible sense of how truly large the mountain is, and how great the distance we had covered. 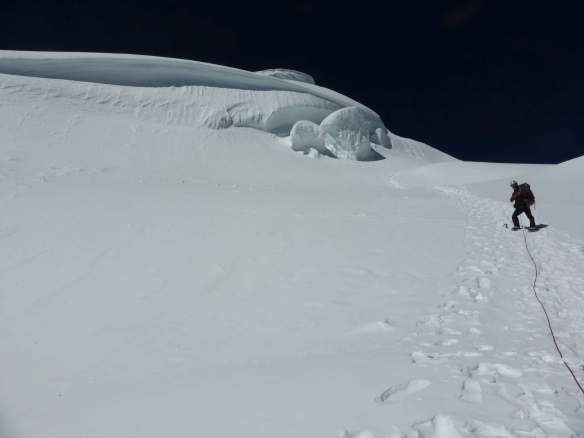 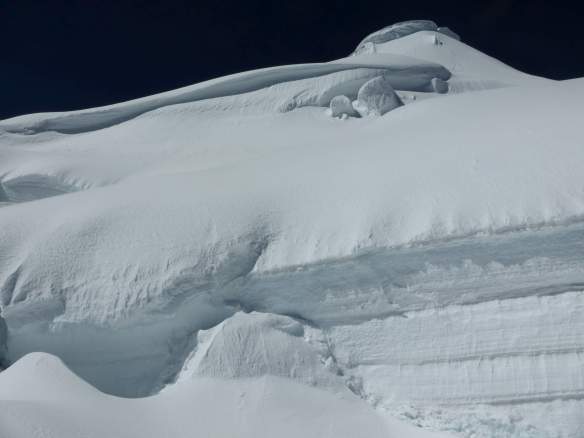 The summit pyramid far above, from halfway down the glacier. 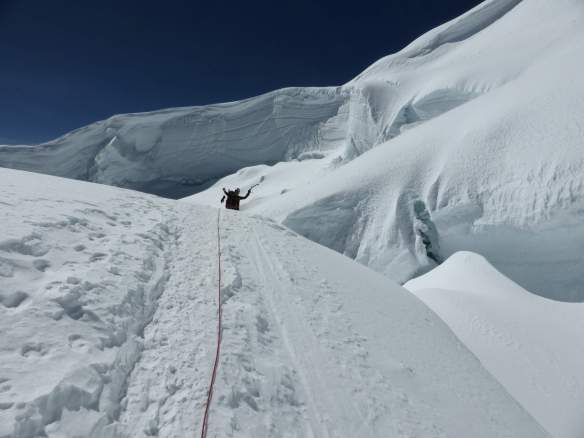 The summit pyramid, from near the base of the glacier.

It took us 3:15 to return to get off of the glacier and return to the tent where we hydrated, dried gear in the sun and took a nap before beginning to pack up.  From our tent we reached the refuge in 1:45, an unpleasant hike down with loaded packs and tired legs.  At the refuge we celebrated with a hot meal and orange juice, spending one more night before leaving to Huaraz early the next day.

As we left the Ishinca Valley, Tocllaraju stood behind us.

Tocllaraju was a very good climb for me.  It met my expectations regarding technical difficulty, and was exactly the sort of climbing which I had come to Peru to get after.  I felt good about my performance on the climb in spite of my awful appetite and poor nutrition, and was delighted that we had made the summit safely and in good strength.  The mountain’s aesthetics had possessed my thoughts for the months leading up to my trip, and its harsh allure left me with a sense of accomplishment and a feeling of beauty having reached its summit.  Edgar was an exceptional climbing partner, and by the time we were off of the mountain and safely back in the refuge I felt like I had learned a great deal from him.  I am certain that I will return to Peru for more climbing, and perhaps will someday walk in the Ishinca Valley below Tocllaraju once again.

Peru is an incredible destination for mountaineering, and attracts climbers from all over the world.  The Cordillera Blanca is a climber’s paradise, with seemingly endless possibilities ranging from the accessible and intermediate to extremely difficult and seldom-climbed peaks.  Peru’s peaks for the most part are technical affairs, and almost all of them involve very physical, lengthy approaches.  Because of this, the Cordillera Blanca is generally not considered a good area for inexperienced climbers to begin learning in.  The Cordillera Blanca also hosts numerous high quality multi-day trekking routes which draw a diverse assortment of travellers into Huaraz.

Huaraz is a city with a thriving tourist industry.  Local guides can be hired on the spot or in advance, and logistics services are easy to obtain from any number of local outfitting companies.  Taxis can be used to reach the starting points of approach hikes, but group transportation is also offered by logistics companies, and is less expensive once the cost is split with others.

I climbed with my Ecuadorian friend Edgar Parra while in Peru.  I hired Edgar as a 1:1 climbing partner and guide, having met him while in Ecuador a few years earlier.  Edgar is charismatic, patient, multilingual, safety-conscious, and an impressively strong, experienced climber.  Edgar’s website is http://www.lonelysummits.com/.