Pik Chetyreh, from nearby Moskvina basecamp.

I visited Tajikistan in the summer of 2018, with the intention of making an attempt on 7105m Pik Korzhenevskaya.  The basecamp for Korzhenevskaya, Moskvina Glades, sits at around ~4300m, and is accessed by helicopter.  Moskvina is remote, far from civilization, and nestled deep within Central Asia’s Pamirs it is surrounded by impressive 6000m mountains.

6230m Pik Chetyreh is impossible to ignore once in Moskvina basecamp, as its prominant, aesthetic pyramid rises on the northeast skyline with remarkable independence; no other summits are nearby to distract one’s perspective of it.  As the vast majority of climbers who make their way to Moskvina do so in order to attempt the pair of mighty 7000m giants, Pik Korzhenevskaya and Pik Kommunizma, Pik Chetyreh sees little traffic.  Nonetheless, the mountain has been climbed many, many times as acclimation prior to beginning on the higher, more committing 7000ers.  It is not hard to imagine the decision making which many before me went through in choosing to attempt it; the mountain is beautiful, and its shape alone is alluring enough to justify a climb.  Besides, a 6000m peak is always a worthy challenge, even if only for acclimation!

On setting my eyes upon Chetyreh for the first time, I knew that I would take a shot at it.  It looked close to basecamp, and appeared relatively simple.  When I found two similarly minded others, a duo composed of an extraordinarily experienced Welshman, Chris, and a friendly Lithuanian, Dave, the plan quickly came together.  We’d head up packed light, just for three days, and have an easy acclimation climb above 6200m. 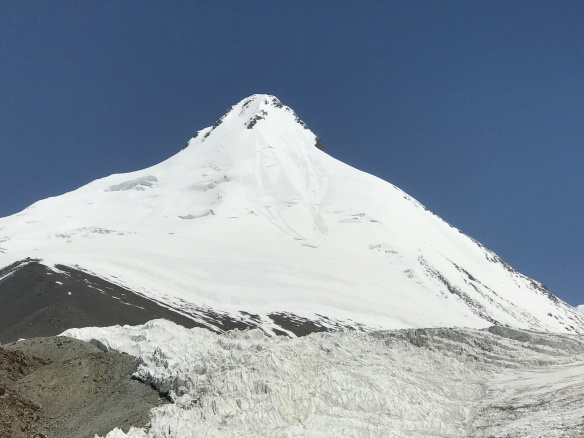 Pik Chetyreh, from roughly halfway through the approach hike.

In the above photographs, our route of ascent can be described as switch-backing up the right-hand skyline ridge – which is quite wide and very gentle lower down – all the way to the upper section of exposed rocks.  At the upper rocks we then traversed a few dozen meters left, out on to the face, and up to the closest of three summits along the inside of two rock bands. We did not traverse so far left as to cross the ridge which cuts down the middle of the mountain in the above photo, and almost ascended the skyline ridge in its entirety. From the lowest exposed sections of rock and upwards the climbing became fairly steep, and I was very happy to have two tools with me, especially when down climbing on descent.  Two 60m ropes would make descent much safer, as two 60m rappels would cover all of the steepest terrain.

The approach from Moskvina basecamp took us around 7 hours, packed relatively light.  The approach was much slower than anticipated, as while totaling only ~5km, it was made slow by the endless scree and unstable moraine which had to be crossed.  Past the lower moraine we encountered quite a bit of rockfall, and were well advised by experienced Russian climbers when they warned us to avoid moving below any slopes during the warmth of afternoon.  Past the moraine, the three of us roped up to cross the broken glacier which lay ahead of us.  A small bergshrund had to be crossed, easily climbed on stable snow, and immediately  followed by a ~150m traverse above large, otherwise impassable crevasses.  The final section of approach crossed a long, wide glacial plateau, covered in ankle deep snow and riddled with small crevasses.  I led the full glaciated section of our approach hike, and punched through twice on the plateau – not an issue with two partners behind me.  We made our basecamp at around 5100m, one of the few sections free of crevasses, and right near the base of the wide, skyline ridge described above.

Our climb did not end up being as clean as we had thought it would.  We left our tents at around 5 a.m., as the sun was just beginning to crack the horizon and dispel the chill of a brisk Pamir night.  The ascent to the first rocky section was smooth and fast, with Chris maintaining a measured pace and making even switchbacks on excellent morning snow conditions.  Above the rocks Chris continued to lead, and quite commendably ended up taking point all the way to the summit.  At the first section of exposed rock the climbing began to get steeper, but remained easy to moderate.  Further above, we eventually reached the upper sections of exposed rocks, and could no longer ascend directly up the ridgeline.  We crossed out onto the face, and began moving up through some easy mixed terrain on loose snow and chossy rock.

It was in this short mixed section – easy enough climbing, but not so easy to downclimb – that I began to seriously question the wisdom of my continuing.  How were we to get down?  I knew that I would not be confident downclimbing more than a few of the moves we had been making, and was cognizant of the fact that with just one 30m rope and limited pro – just two of Chris’s ice screws and my one picket – rapping wasn’t much of an option for us. After heated discussion, in a bad location, we agreed that we would be able to try descending via another gully, and continued to ascend.  In hindsight, the decision to continue upwards was the correct choice, and much safer than trying to descend the mixed moves which we had climbed.  The terrain soon cooled off, welcoming us back onto straightforward snow, and we found ourselves on the summit ridge.  Hypoxic and tired, we had climbed for 9 hours and 15 minutes, reaching the top at around 2:15 p.m.

The summit views were spectacular, and offered us full perspective of both Korzhenevskaya and Kommunizma, along with views of innumerable 6000m peaks to the north and east, remote and wild.  Behind our high point were two additional summits, and we were uncertain whether they were on par with the point we stood upon, slightly higher, or slightly lower.  Looking carefully at images from the top, and photos I later took from Korzhenevskaya, it is possible that perspective is deceptive and that they are a part of a different mountain entirely.  The Russian guides in basecamp had told us that the true summit was the one closest to basecamp, which described the prominent ridge we stood upon, and we decided that it was acceptable to call it good.  We didn’t stay at the top long, and quickly began to descend.

We were in over our heads descending the upper mountain.  Without gear to rappel, we had no choice but to down climb the steep snow of a fresh gully, adjacent to our path of ascent.  Chris fell just below the summit, but arrested himself well, and between this and my arrest backing him up didn’t slide very far. After his slip I led the remainder of the descent, carefully placing my tools and gingerly kicking good steps, aware that nothing was protecting a fall but caution and stable, steady movement.  Dave fell three times on the down climb and traverse across the face, with Chris and I catching each of the falls with quick self arrest, fueled by adrenaline.  It was an unpleasant, dangerous finish to the climb, the likes of which I hope to never repeat.  I should have brought a second 30m rope, to rappel on alongside the 30m line which we used to tie in.  We should have had more screws than the two which Chris had the good foresight to have packed.  We all should have had two tools.  Ideally, we should have had two 60m ropes and several spare pickets.  We made it back to the lowest exposed rocks safely, and from there we trudged down the rest of the mountain, me breaking trail through now-soft, knee deep slush.  The sun works wonders in the Pamirs, even at high elevations, and everything melts out in the afternoon!

The day after our summit we descended, and returned to Moskvina basecamp in around 4.5 hours.  Rockfall in the moraine was more severe on our descent day.  The bergshrund crossing was getting periodically showered with golf ball sized rocks – particularly unnerving when I wanted to place a picket before crossing.  Back in basecamp Pik Chetyreh remained as charismatic as before, albeit far more satisfying to look upon having visited its summit. 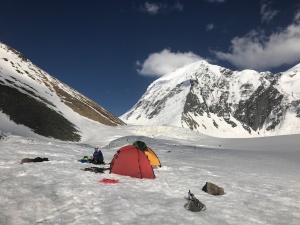 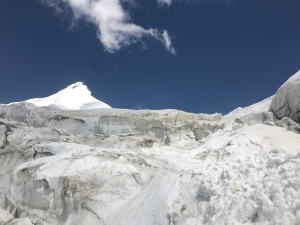 Crossing the broken glacier below Pik Chetyreh, on approach.

Pik Chetyreh from near Moskvina.

The beginning of the long, wide glacial plateau, a minefield of crevasses.

Looking back down the glacial plateau. 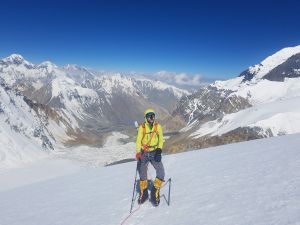 Me, ascending the broad, gentle slope lower down the ridge. 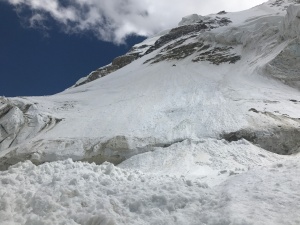 The small bergshrund we crossed on the approach hike. 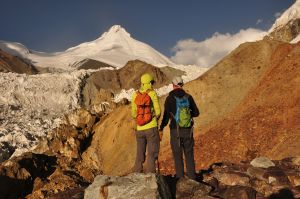 Chris and I, roughly halfway across the moraine section of approach.

Towers of ice in the broken glacier below Pik Chetyreh. 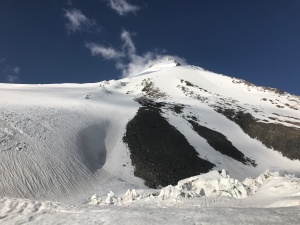 The broad, gentle skyline ridge which we ascended. The steeper terrain above the rocks can be seen where the ridge thins and more rock becomes exposed.

Headed up across the bergshrund. 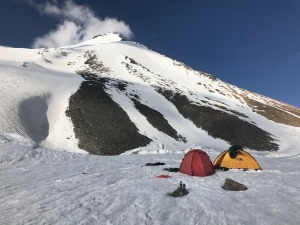 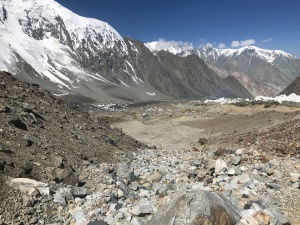 Looking down at Moskvina basecamp, from the beginning of the approach hike. 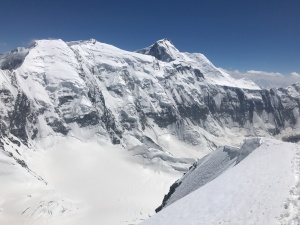 Looking across to Pik Kommunizma, from the summit.

Dave and Chris on the summit.

Me, on the summit. Its prominance as one of three highpoints is better realized in this perspective. I am looking at my GPS. 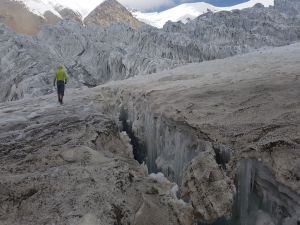 Me, checking out snow bridges, at the beginning of the broken glacier. 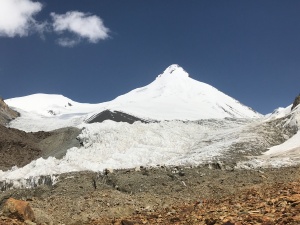 Pik Chetyreh from near the end of the moraine.