Kinabalu, from near the park entrance.

4096m Mount Kinabalu is Malaysia’s highest mountain.  Kinabalu stands on the island of Borneo, in Malaysia’s Sabah province.  Kinabalu is an accessible trekking peak famous for its sunrises, spectacular clouds, and the many interesting rock formations found on the upper mountain.

We began our hike in Kinabalu National Park, where we arrived by bus in the early afternoon.  We had booked a climbing package in advance, going directly through the national park.  After doing a good amount of research this appeared to be the least expensive means of hiking.  The park rules mandate that all hikers be accompanied by a local guide, and a multi-day hike with an overnight in the Laban Rata resthouse (a hotel) was also mandatory without special permission when we hiked.  This makes hiking Kinabalu quite expensive when compared to comparable mountains in Taiwan or China.

After an evening resting in a dorm room within the national park, we were up at around 8 a.m. to meet our guide and begin the hike.  A short drive in a park bus took us to the trailhead.  The first day of the hike was steady and laid back, with no need for much rush.  Our destination was the Laban Rate resthouse, located at 3272m below the bare rock of the upper mountain, where we would spend the evening before heading for the top the next morning.  The hiking trail is a well maintained path through dense forest, with an abundance of stairs.  We were lucky not to see any precipitation on the way up, although clouds and mist flowed past us through the forest as we ascended.

Hiking through the lower forests.

We reached the Laban Rata guesthouse in the early afternoon.  Given the slow pace we had taken, it struck me that there isn’t much reason to hike Kinabalu across two days.  Indeed at Laban Rata we met a British hiker who decided to head for the summit that afternoon rather than wait until morning, and did so with daylight still remaining when he returned.  Laban Rata is a well stocked hotel, and meals were included with the room booking. 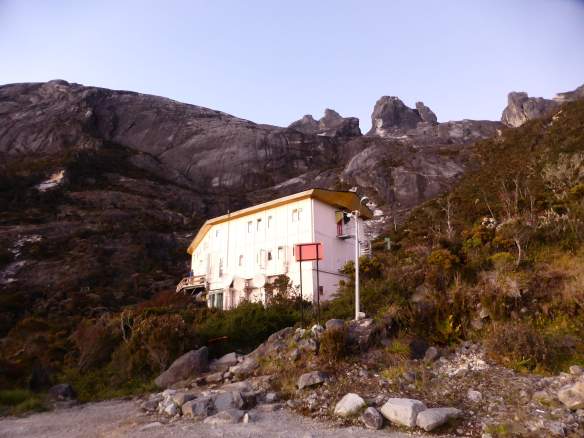 View of the upper mountain from Laban Rata.

After dinner the clouds began to rise, and we were treated to a fantastic light show as the sun set. 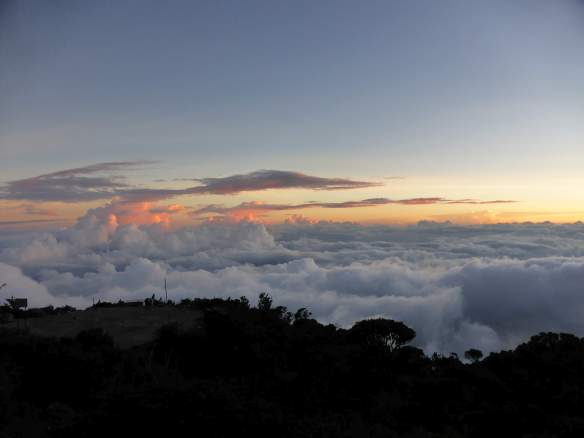 Overnight it rained heavily.  We woke up at around 1 a.m. and ate breakfast, ready to get started.  The rain stopped, and we began hiking alongside the crowd at 2:30 a.m.  Above Laban Rata the trail first follows stairs and a dirt path, and later begins to ascend over bare rock.  Kinabalu’s rock is wonderful granite, grippy and textured.  Fixed ropes were in place along steeper sections, but with my trekking poles for support they weren’t really needed.  The steepest section involved a little bit of easy scrambling, and above it we reached the checkpoint hut below the mountain’s enormous plateau.  From here the going was easy, following a guideline across mostly level rock towards the plateau’s highpoint.  Reaching the summit before the sun, I joined the crowd of other hikers waiting for the sunrise.

The signpost on Kinabalu’s summit.

The sunrise was far less impressive than the vast sea of clouds which obscured it.  Low’s Gully was impressively deep, stretching out beyond the edge of the summit plateau. 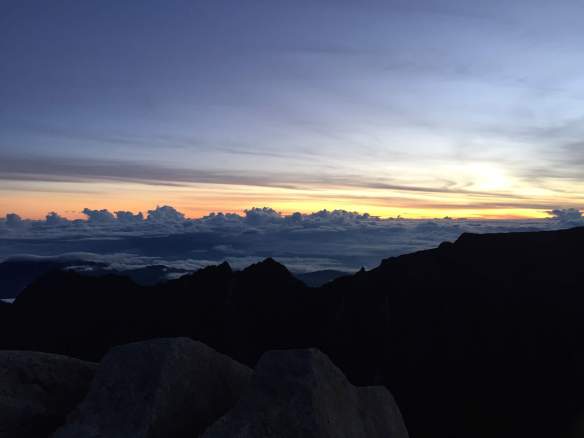 Sunrise from the summit. 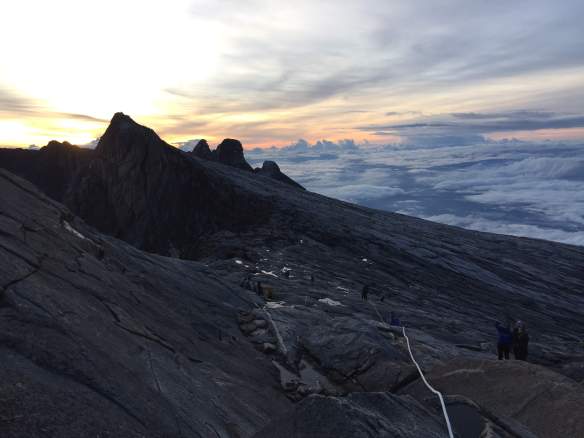 Looking down the guideline which stretches across the summit plateau.

The way down from the top was a lot more enjoyable than the ascent, and I jogging downwards across the grippy rock.  Returning to Laban Rata for a second breakfast, we took a nap before making the long walk back down to the trailhead and park entrance.

Kinabalu was a very straightforward hike across easy terrain.  The low altitude of the mountain doesn’t pose significant difficulty, and the extensive infrastructure in place on and around the mountain makes the hike very accessible.  The cost to hire a guide, book a room in Laban Rata, and cover meals was relatively a lot more expensive than ‘free’ mountains elsewhere which still offer equally interesting terrain.  The hike is not particularly challenging.

Despite all of this the upper mountain does offer some impressive and beautiful rock, and the cloud formations we encountered were quite lovely.  Living close to Malaysia and already visiting for tourism, hiking Kinabalu was particularly accessible for me and worth the two day time commitment.  I wouldn’t recommend travelling specifically for Kinabalu, but a hike as part of a grander travel itinerary makes sense provided that the price of access isn’t too off-putting.  From some perspectives it might be a better idea to save the money and put it towards a trip to South America or China instead!

We booked our hike through Sutera Sanctuary Lodges, the company which directly manages the park’s restaurants, dorms, and Laban Rata resthouse.  In planning our trip their rate was the least expensive I could find, likely because they are the direct service provider which other companies book through.  Their website is http://www.suteraharbour.com/ and while the site has no mention of Kinabalu they can be contacted about bookings via email.