The Main Peak, as seen from the north saddle. This photo was taken on my April 2012 trip.

Jade Mountain, Taiwan’s highest at 3952m, is also perhaps Taiwan’s most famous.  A popular two-day hike, Jade’s Main Peak is relatively easy to access via a well-maintained – perhaps best described as ‘groomed’ – trail from the western trailhead at Tataja.

The first ~8 km of the western trail follows a cliff. Areas prone to landslide have been reinforced, and the trail is wide and smooth.

Doing more and more day hikes around Taipei, I had slowly begun looking into a Jade Mountain hike with some friends.  As I was fairly new to Taiwan’s system of mountain permits (a system especially pronounced at Jade, perhaps the country’s most popular high-mountain hike) the two day trip took some planning, and came with high expectations! We planned to use the Yuanfong cabin to overnight, as the Paiyun lodge was undergoing renovation at the time of our trip.

Here is an outline of the itinerary we took:

An outline of our two-day hiking itinerary.

Day 0: Took a bus from Taipei to Jiayi, where we rented scooters.  Drove to the western trailhead at Tataja, and overnighted in the Dongpu hostel, near the restricted access road at the base of the mountain.  The drive from Jiayi takes roughly three hours, and the Dongpu hostel is a very comfortable place to base a hike out of. 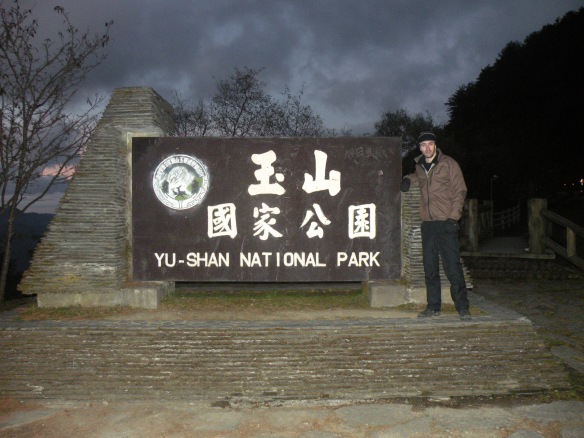 The beginning of Yushan national park, near the Dongpu hostel.

Day 1: After a good night’s sleep, we were up for an early start up the service road. After an hour of walking on pavement, we reached the official trailhead.

Our group at the trailhead.

The weather wasn’t ideal; overcast and very humid.  It looked like rain.  The trail upwards took us along the side of a cliff and through a deep valley, with very steep drop offs in sections.

Trees growing from the side of the cliff. 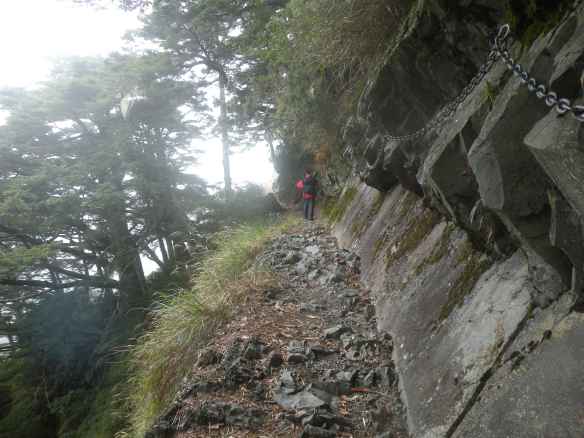 The trail is very well maintained, and for additional safety numerous chains have been installed where the path is narrow. 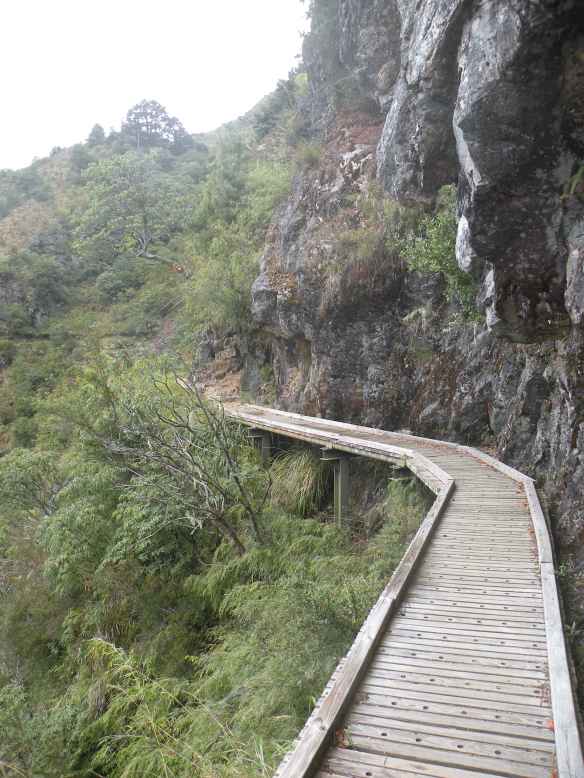 In rockier areas, the trail navigates across boardwalks.

Some of the drop-offs at the side of the trail were very impressive, and the views of the valley below were noteworthy, despite the fog and overcast sky.  We began to appreciate the wide trail; unmaintained, a narrow trail along this steep cliff would be quite dangerous! 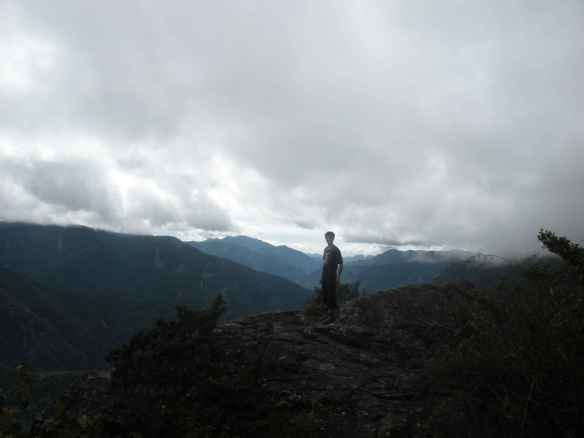 Looking out across the valley.

Further in, the forest became denser, and some beautiful trees could be seen lining the path.  The hike to this point was fairly easy and very straightforward, due largely to the great trail and gentle ascent.  As we entered the forest, fog began to roll into the valley, obscuring most of the views but contrasting nicely with the trees along the path.

A thick blanket of fog poured into the valley. 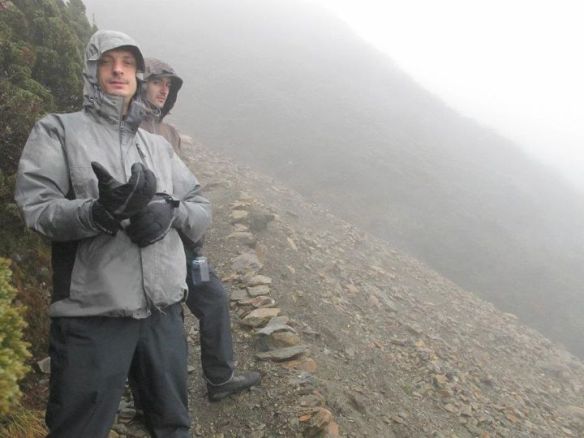 We had to accept that the views were gone.

Dead trees on the side of the cliff created an eerie atmosphere in the fog.

Taking a sandwich break along the way, a pair of plump little birds joined us.  No doubt looking for food!

The birds, pondering us with inquiring minds (or so it would seem). 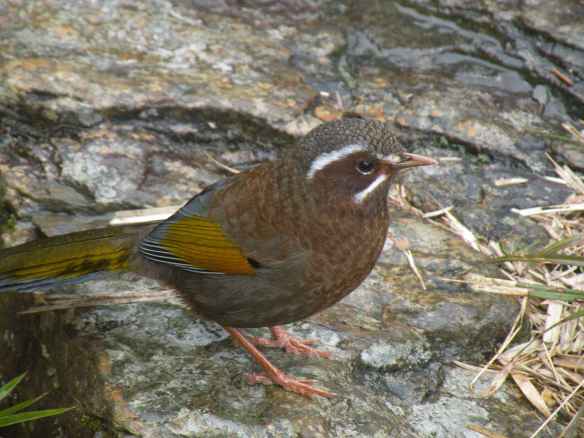 They were bold little creatures, and definitely expected some handouts!

After a few hours of progress a light drizzle began, and the trail began to ascend more sharply, following a series of rocky switchbacks.  We found ourselves enjoying the terrain, and began to feel like we were actually climbing up a mountain.

The path became rockier as we headed upwards.

Further along, we reached “the great precipice”, a steep and severe rock wall bypassed by a section of boardwalk and some clever trail construction.  It was impressive to look at, and a great spot to take a little break.

At the start of the precipice.

Resting on the boardwalk.

After the wall, the rain began coming down in earnest.  The fog thickened, and the great views we had been hoping for higher up were completely obscured.  We passed Paiyun cabin, and as we gained altitude, the weather got even worse.  Our original plan had been to wake up early the next day and head to the top for a sunrise, but we reasoned that this plan wouldn’t bear fruit for us given the weather.  We agreed that if it continued raining the next day we would rather sleep in, and thus we decided to head to the top in one push.

The wind worsened as we moved up the final portion of trail, a rough and very direct scramble over loose scree and crumbling rock.  I would learn later, on my third hike of Jade, that there is an alternative, much easier switchback route which branches off to the side – but the direct trail is more fun!  In strong winds and rain we felt as if we were climbing up into a storm.  Visibility was very poor.  When we finally reached the top, I was yelling at my friends to stay low, for fear the wind would take us right off!  The weather was heinous.

Taking pictures in the wind and rotten weather at the top of Jade Mountain.

My facial expression is a mixture of happiness, relief, and annoyance.

We spent less than five minutes on top; just long enough for some quick pictures.  We descended quickly, eager to make the Yuanfong cabin and get out of the weather.  The Yuanfong cabin is very basic inside, but it was dry, and we had it to ourselves.  I can’t imagine sharing it at capacity, with twelve other people.  It would be very unpleasant.

A basic A-frame, the cabin was nonetheless nice and dry.

“Bedspace” is allocated as part of the permit application process. You are designated a section of floor to sleep on. Luckily, we had the entire thing to ourselves.

Day 2: The next morning, our decision to sleep in paid off, as the weather had refused to clear up overnight.  Fog still hung over everything, and rain continued to drizzle down.  We ate a hot breakfast, packed up, and began to head down.  Roughly halfway down, the rain stopped, and we enjoyed a nice glow through the fog and trees. 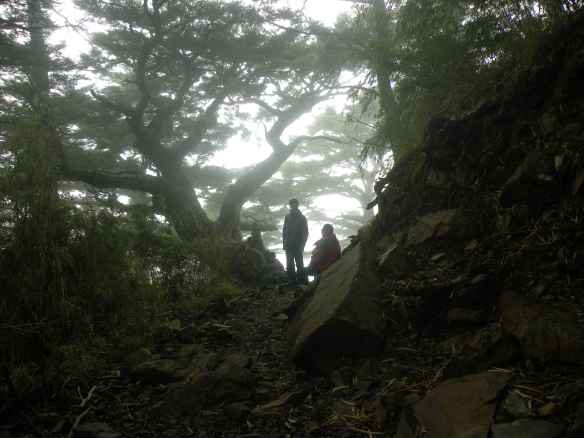 Taking a break underneath an interesting old tree.

The air cleared a bit, and we enjoyed some morning light.

After four or five hours of descent, we reached the restricted access road that marked the trailhead.  By now the rain had stopped, and we comfortably headed back to the Dongpu hostel to pack up and head home.  We ate a nice lunch at the Dongpu hostel, and drove back to Jiayi, catching a train from there back to Taipei. 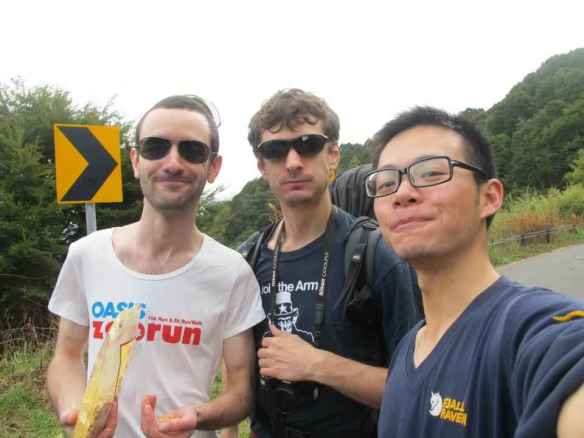 We chose to use the Yuanfong cabin, and booked space for it through the permit application process.  At the time of our trip, the Paiyun cabin – the use of which would make climbing the Main Peak easier – was still closed for construction.  It will probably open soon.  Yuanfong has a reliable water source.  It is also possible to make a single-day ascent/descent of the Main Peak (and, with determination, probably one of the East, or North, or West peaks as well), provided you can illustrate experience and physical fitness  – email the permit application staff through the Yushan National Park website (linked below) to obtain the paperwork for this.

The Dongpu hostel (東埔山莊), located at the base of the mountain near the restricted-access service road, is very comfortable, and even provides warm bedding.  Bedspace can be booked, their phone number is 0492702213.

Getting to the trailhead isn’t difficult.  We took a bus to Jiayi, rented motorbikes, and drove ~3 hours to the trailhead.  This is by far the least expensive means of getting there!

Hiking Jade Mountain requires a national park entry permit, as well as police issued mountain entry permits.  Jade Mountain is a popular hike, and it is difficult to obtain a weekend permit; with Paiyun under construction, the number of hikers allowed access per day is limited.  Plan on going during the week.  The Yushan National Park permit website (in English) is located here:
http://mountain.ysnp.gov.tw/english/CP_how.aspx?pg=03&w=2&n=23001
Police permits (In Chinese) can be applied for here.  For the website to load, you need to use Internet Explorer and adjust the encoding for ‘Chinese Traditional, Big5′ (found through Page -> Encoding):
http://eli.npa.gov.tw/E7WebO/index02.jsp